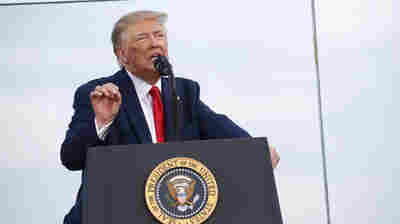 President Trump speaks during the Fourth of July “Salute to America” event on the South Lawn of the White House, on Saturday.

At the “Salute to America” event, Trump referred to protesters calling for the removal of statues as an “angry mob” and likened the defeat of the “radical left” with defeating Nazis and terrorists.